You are here: home » About Wild Baby Rescue Center

We are a non-profit dedicated to the preservation of wildlife through education, rehabilitation and release. Located in Blairstown, New Jersey the volunteer-powered Center is run by a licensed wildlife rehabilitator.

Aroura the Fox in a pond developed by local college students

Penny is out of her cast and released into the wild!

A groundhog enjoying a stay at The Center.

An intern feeds the fawn their bottle of formula.

Thank you Lori Martin for this awesome 10th Anniversary Cake!

A little raccoon gets big and healthy.

Because humans and their activities are often responsible, directly or indirectly, for the injuries suffered by wildlife, we believe that we have a responsibility to assist in healing those injuries. Wild Baby Rescue Center provides a means for caring people to give injured and orphaned wildlife a second chance to live out their natural, wild lives.

Injured and orphaned animals are provided special diets appropriate for their species, age and condition. Medical and supportive care is also provided. During their convalescence, care is taken to avoid dependence on the care-givers so that our wild patients remain truly wild and have a better chance of survival once they are released. All patients are appropriately housed until they are fully recovered and ready to return to the wild. Orphans may start their stay in the warm incubators indoors then move out to the outdoor sheltered cages where they can get used to the sound of the rain, sunrise/sunset, and learn to forage/hunt for food. Each species is different and each patient has specific needs. Some of our patients are featured in our American Wild Tails blog.

Having called Cranford home for several years the Center expanded its facilities and moved to Blairstown, New Jersey in 2008. Wild Baby Rescue Center receives and cares for animals all year long. We are a 501(c)(3)nonprofit (charity id 223-119-510/000). The Center is run by Hope Kosch-Davison, an experienced wildlife rehabilitator, licensed by the New Jersey Department of Environmental Protection, Division of Fish and Wildlife. Everybody at Wild Baby Rescue is a non-paid volunteer. Take a look at some of the skills it takes to volunteer for a wildlife rescue.

It's nice and warm in our barn.

A raccoon in an indoor crate.

Warm babies snuggled in the incubator with knit nests

Growing fresh produce for patients in the garden

Well before becoming the Executive Director of Wild Baby Rescue (1999) Hope Kosch-Davison established herself as a knowledgeable caregiver. Hope is a Registered Nurse and licensed E.M.T. She holds an Associate’s degree in Biology from Union County College. Over the span of fifteen years she worked as a Registered Nurse for the Elizabeth General Medical Center and the Urological Group of Union County.

In 2000, at the completion of a year-long apprenticeship in wildlife rehabilitation, Hope became a New Jersey state licensed Wildlife Rehabilitator for Raccoon, Squirrel, Groundhog, Opossum, Flying Squirrels, Chipmunk, and Eastern Cottontails. With subsequent apprenticeships for Bats and Skunk and then Fox, Fawn and Coyote Hope’s permit from the New Jersey Department of Environmental Protection, Division of Fish and Wildlife allows her to care for a variety of orphaned and injured wildlife.

In 2014 the Center’s charge expanded to include Ermine, Fisher Cats, Mink, Muskrats, Porcupines, and Weasels.

Hope has declared one of the Center’s goals to be “strive to make improvements in the care of our wild patients each year”. As the Executive Director she stays abreast of developments in the rehabilitation field as an active participant in conferences and workshops. Hope has represented the Center as a guest speaker for a variety of groups including an outreach program at Montclair State College, an ACO course at Kean College, the Cranford Boy Scouts, and Scotch Plains gifted and talented classes.

Hope is a member of the Garden State Wildlife Rehabilitators Cooperative. 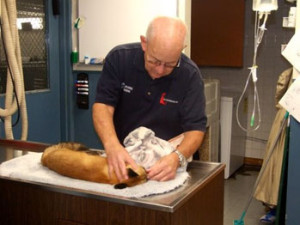 Dr. Barry Orange examines Cinderella the fox. Thank you Dr. Orange for your dedication and continued support and care for the Wildlife at Wild Baby Rescue Center.

Caitlin is a Delaware Valley College graduate with a degree in Conservation and Wildlife Management. She spent multiple college semesters as an intern at Wild Baby Rescue, and finally apprenticed in 2012. She earned her permit in April of 2013 and has been trying to balance work and rehabbing ever since. Recently, she spent a year as the Outreach Coordinator for the Essex County Turtle Back Zoo; where she was responsible for taking the education animal collection to schools and adult living facilities to give educational programs. Currently, Caitlin is a veterinary technician working with a variety of small and large domestic animals such as dogs, cats, horses and various ruminants.

Sean has dedicated countless hours to Wild Baby Rescue over the course of many years. It all began with a client bringing an orphaned squirrel into his place of employment. He wanted the squirrel cared for legally and properly, so he contacted Hope. He began volunteering and completed his apprenticeship several years later. He has been a licensed wildlife rehabilitator since completion. Sean is a licensed and credentialed veterinary technician and currently works in practice.

*patients limited due to covid