A small baby groundhog was found abandoned and was brought to our own Dr. Barry Orange at Lexington Animal Hospital in Clark. The infant was so lethargic and so cold his temperature did not even register on the thermometer. He was put on a heating pad and given fluids under the skin. Baby Yebba was then brought to the Center. It took four hours for him to warm up so that he could be fed.

He was given a rehydration fluid with a little sugar added. Over the next thirty-six hours we were able to increase his formula from 1/4 strength to full strength.

With a lot of tender loving care, day by day he grew stronger. It only took a few weeks for our baby groundhog to learn to lap up his slurry from a dish. He soon began enjoying greens, pears and apples. Yebba has made a remarkable recovery and is now an eager little eater and a plump little groundhog. 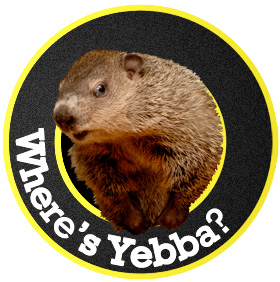 Since his release Yebba has been spotted on the WBR grounds.

He’s built himself a den.

*patients limited due to covid